Does Uluru get cold at night? 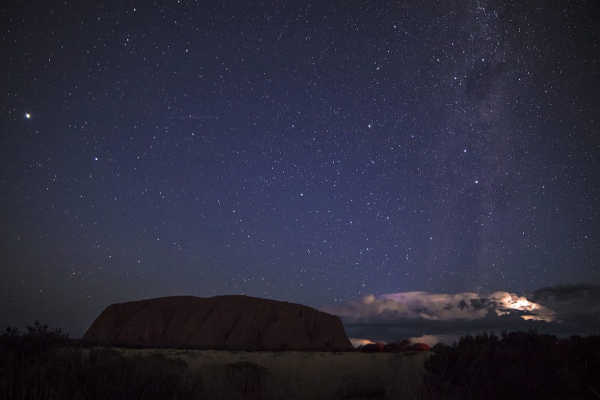 The giant monolith is one of the country’s most easily recognisable wonders, up there with the Great Barrier Reef and Sydney Harbour Bridge. But does it get cold in Australia’s Red Centre, where this mythical stone has sat for 500 million years?

If so, how could this be? It’s so hot in the desert, right? Well, not exactly. The climate in the region is actually rather extreme, with temperatures ranging from 3.5° C in July to 37.5° C in January. Winter nights (falling between June and August) can drop below 0 – that’s even colder than in the cities that sit below the Red Centre!

The Red Centre is very dry, receiving hardly any rainfall throughout the year. The dryness and lack of humidity mean there is no water blanket to trap in either the heat or cold. Therefore, on winter nights, when the sun goes down, the day’s warmth escapes the atmosphere, creating a chill that definitely calls for rugging up.

Now that you know why Uluru gets so cold at night, let’s take a look at some of the fun stuff you can do there (along with visiting the Rock, of course!).

Related article: Make the most out of your Northern Territory trip

Previous article: Why is the Great Barrier Reef so special?
Language »
Covid-19 Information and UpdatesRead More