Are there crocodiles in Mossman Gorge?

One of the deadliest animals on earth, saltwater crocodiles are one of Australia’s most fearsome creatures.

As the largest reptiles in existence, they have been lurking the country’s waters for millions of years. They are so dangerous that certain areas of Australia have banned swimming due to these creatures potentially occupying the region. But what about the Mossman Gorge?

About the Saltwater Crocodiles

Saltwater crocodiles are the oldest creatures around. They have survived virtually unchanged since their prehistoric origins as close relatives to the ancient dinosaurs. They have remained very much the same over the millions of years of their evolution, with their strong jaw, massive body and tail, camouflaging scales, and quick reflexes making them perfect predators. The creatures have a wide diet, eating fish, small birds and larger creatures like kangaroos. They inhabit the northern region of Australia, preferring the tropical and humid climate compared to the colder regions down south. They can be found in the murky brown waters of the region, such as large rivers and lakes, but also can be seen in the ocean at times. 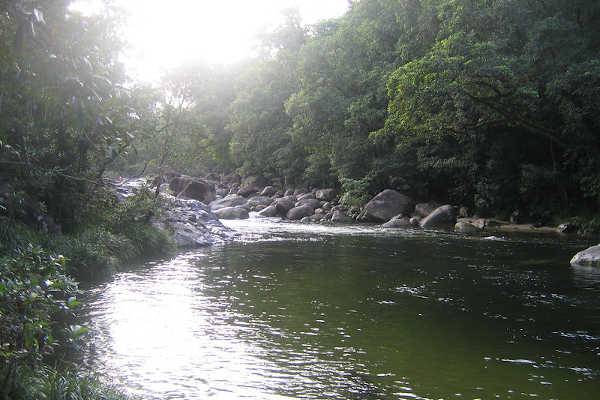 Mossman Gorge is a truly beautiful spot with crystal-clear water that flows through the ancient granite boulders that have come to rest in the shallow waters of the gorge. Hidden within the thick bushland of the region, it is an enchanting swimming spot to enjoy after a day of trekking through the rainforest. Sunbake the day away on the smooth boulders here, or swim within the refreshing waters of the gorge, spending your day in the tranquil area this gorge is famous for!

Crocodiles in the Mossman Gorge

As cold-blooded reptiles, crocodiles prefer warm water and will avoid cold and fast-flowing waterways. Popular swimming spots such as Mossman Gorge are considered safe from saltwater crocodiles, with the staff monitoring the region throughout the year to know the whereabouts of the local crocs. Signs are on display at croc-infested waters around Cairns and the Daintree Rainforest, with Mossman Gorge having no signs or cautions around to suggest otherwise. However, the saltwater crocodile can be found in the murky waterways, rivers, and swamps nearby the gorge. So you can go visit and see the crocs safely after your Mossman Gorge adventure when hopping on a local croc tour.

Related article: Why you should visit Mossman Gorge

Previous article: How long is the ferry from Cape Jervis to Kangaroo Island?
Language »
Covid-19 Information and UpdatesRead More