How long does it take to walk around the base of Ayers Rock?

Ayers Rock, more commonly known as Uluru, is Australia’s incredible red centre. This giant sandstone monolith is a true testament to nature’s ability to create the magical, the majestic and the utterly magnificent! 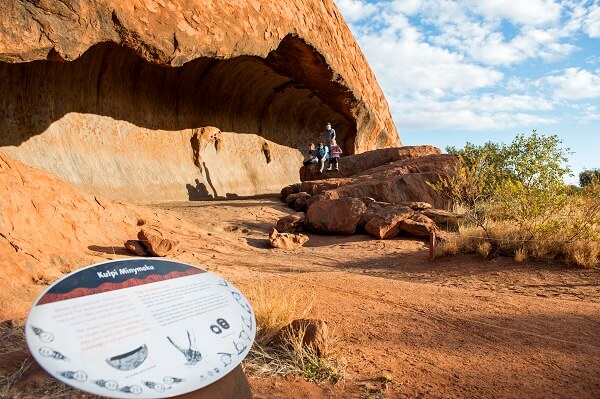 Travellers from all over the world journey to this isolated desert outpost to marvel upon the wonder, with its 863m height astounding visitors with just how incredible it really is.

It takes roughly 3.5 hours to circumnavigate Uluru, taking part in what is known as the “Uluru Base Walk”. This may sound like a lot, but it’s actually very cruisy, as the walk is completely flat and there is plenty of fascinating info to take on as you go.

What’s more, the Uluru Base Walk is the very best way to experience the geological wonder, fascinating animals and lush plant life that surround the great stone, so it’s really something that shouldn’t be overlooked when visiting Uluru!

The same goes for these unforgettable experiences:

Uluru in the twilight hours

Anyone who has seen Uluru will tell you: there is no better time to marvel upon its expanse than in the hours before sunrise or sunset. This is the time of day when the desert illuminates with all magical hues of blue, pink, yellow, red and gold.

It’s the time when such colours dance and dazzle off the monolith in a natural light show that human ingenuity simply cannot begin to replicate. These beautiful shades will be forever etched into your memory as you watch them light up the sky and great Uluru below…

You may not have known much about it before heading to Uluru, but you are sure to learn all about it when you get there. Kata Tjuta may be Uluru’s lesser known neighbour, but for most it is as every bit spectacular.

This series of giant, dome-like formations give one the impression that they have left Earth and landed on the Red Planet – such is the unique shape and magnitude of its forms.

What’s more, Kata Tjuta is full of unforgettable walks that intertwine through its lush valleys and rugged paths. The cool, shady areas are a refuge for the national park’s plants and wildlife, so you might even spot a few dingos and kangaroos cruising around its surreal structure…

Related article: When is the best time to visit Uluru?

Previous article: What are the natural features of Victoria?
Language »
Covid-19 Information and UpdatesRead More